Sibling Rivalry — Understanding It And Controlling It 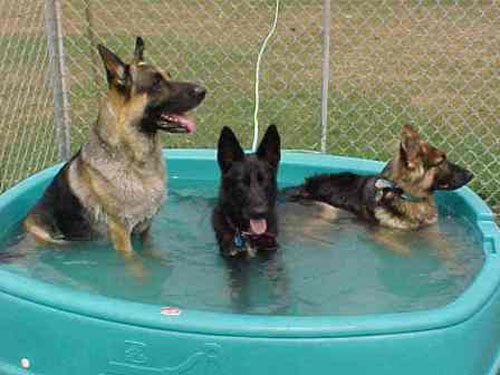 “Sibling rivalry” is a term we use to connote dog-to-dog aggression in the household. It has always been a big problem especially to those having more than one dog at home. Getting stuck with their fights not only drives you mad and crazy but threatens you and your family’s safety. As a responsible dog owner, you wouldn’t want to see your dogs fight, creating too much noise, too much threat and too much mess at home. It would be better if you get to understand the reasons why these things burst out:

1. Competition over resources. It is always normal to end in fights for dogs because of this since by nature, dogs are territorial animals. They may fight over toys, places to sleep, toys, or even YOU.
2. Poor socialization as a pup. Rough play would be the start of it. Since these dogs, when they were still puppies have not been into biting inhibition, they end up going crazy over the biting thing and light up fights between the other dogs at home.
3. Dominance hierarchy instability. When a younger dog reaches maturity, it may challenge the older ones, or just the older dogs thinking that they have been asked into a duel. Or it can be that two dogs of the same sex and age, which is the usual case.

Now that you have ruled out the common causes, you may be ready to take on the referee role of stopping your dogs from destructing each other.

If this is about dominance problem and one of your dogs had already established the dominant role, then go with it, and respect it. You can show this by giving the dominant dog attention first, before the rest. If they are fighting over resources, then take the root cause away — simple! And they’ll quit the quarrel. But if you expect this as a daily routine of theirs, might as well mess up with it — tire them, calm them, and they won’t have energies at all to start a fight. Most importantly, establish the fact that you are the leader, the alpha, the respected and trusted one. Obedience training should be done properly then.

Feeding Your Dog Right According To Your Vet
Randall July 20, 2019

Feeding Your Dog Right According To Your Vet

Getting More Mix of These Fun Dog Food Recipes